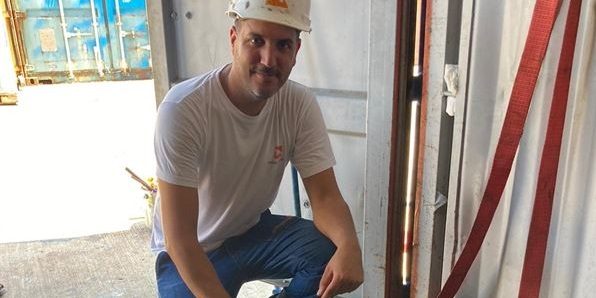 With the FIT in place, the Israeli Electric Company (IEC) commenced operations to officially connect the EWP-EDF One wave energy project to Israel’s energy grid. Once connected, the EWP-EDF One Project will represent the first time in the country’s history that electricity produced by the power of waves will be transmitted to Israel’s national electric grid.

More info about the FIT, which shall incorporate a base production price and an added premium for mitigating pollution, can be found in the official announcement by the Israeli Electric Authority, in the following link (decision number 63605): 63605 (www.gov.il).

The EWP-EDF One Project is executed in collaboration with and co-funding from EDF Renewables IL and the Israeli Energy Ministry, which recognized the Eco Wave Power technology as “Pioneering Technology.”

“The official start of grid connection for our EWP-EDF One Project is a moment that we have been waiting for, as it represents an important milestone for our company and our country,” said Inna Braverman, Eco Wave Power’s Founder and CEO. “Eco Wave Power is committed to making a positive change in the world, and we can’t wait to turn the switch on at the EWP-EDF One Project at the Port of Jaffa.”

In July 2022, Eco Wave Power announced that it commenced real conditions test runs on the EWP-EDF One Project to examine the operation of the mechanical and hydraulic subsystems of the project. The floaters were lowered into the water for the first time, and the successful testing puts Eco Wave Power one step closer to full operation of the power station.

Additionally, Eco Wave Power will soon commence installation on its first U.S. location of its wave energy technology at AltaSea at the Port of Los Angeles. Furthermore, the Company holds concession agreements for commercial installations in Spain, Portugal, and other locations, completing the Company’s growing 327.7 MW project pipeline.

The Company is currently finalizing the construction of its grid connected project in Israel, with co-investment from the Israeli Energy Ministry, which recognized the Eco Wave Power technology as “Pioneering Technology” and will soon commence the installation of its newest pilot in AltaSea’s premises in the Port of Los Angeles. The Company also holds concession agreements for commercial installations in Europe and has a total projects pipeline of 327.7 MW.

This press release contains forward-looking statements within the meaning of the “safe harbor” provisions of the Private Securities Litigation Reform Act of 1995 and other Federal securities laws. Words such as “expects,” “anticipates,” “intends,” “plans,” “believes,” “seeks,” “estimates” and similar expressions or variations of such words are intended to identify forward-looking statements. For example, Eco Wave is using forward-looking statements when it discusses the commencement of installation at AltaSea at the Port of Los Angeles, that the EWP-EDF One Project – once connected – will represent the first time in Israel’s history that electricity produced by the power of waves will be transmitted to the country’s national electric grid, and the Company’s commitment to making a positive change in the world. These forward-looking statements and their implications are based on the current expectations of the management of Eco Wave and are subject to a number of factors and uncertainties that could cause actual results to differ materially from those described in the forward-looking statements. Except as otherwise required by law, Eco Wave undertakes no obligation to publicly release any revisions to these forward-looking statements to reflect events or circumstances after the date hereof or to reflect the occurrence of unanticipated events. More detailed information about the risks and uncertainties affecting Eco Wave is contained under the heading “Risk Factors” in Eco Wave Power’s Annual Report on Form 20-F for the fiscal year ended December 31, 2021 filed with the SEC, which is available on the on the SEC’s website, www.sec.gov.