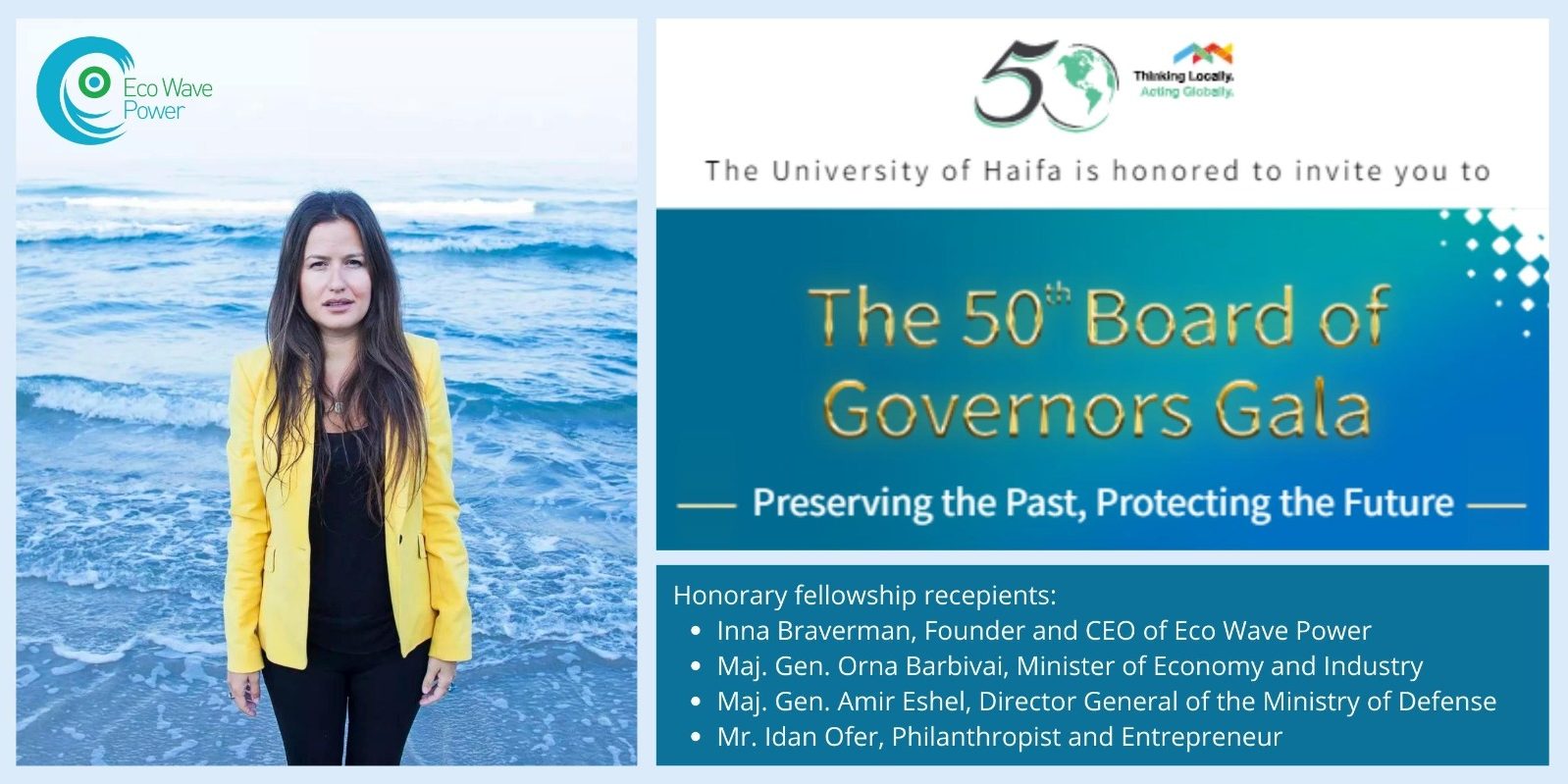 Other distinguished alumni, including Entrepreneur and Philanthropist Idan Ofer and Minister of Economy and Industry of Israel Orna Barbivai, will join Braverman on stage.

HAIFA, ISRAEL (June 16, 2022) – Inna Braverman, Founder and CEO of Eco Wave Power Global AB (publ) (Nasdaq Capital Market: WAVE) (“Eco Wave Power” or the “Company”), has been selected as a recipient of an honorary fellowship from the University of Haifa, the largest research university in northern Israel. Braverman is the youngest person in the history of the university to receive such honorary fellowship.

Also receiving honorary fellowships will be:

“It is really touching to be recognized with this distinguished honorary fellowship from my alma mater,” said Braverman, who had founded Eco Wave Power when she was just 24. “To be in the same company as these distinguished leaders is truly humbling. I am also extremely proud to be a University of Haifa alumnus, as the university recently became the first Israeli University to adopt the United Nations’ Sustainable Development Goals (SDGs), showing its true commitment to sustainability and the future of our planet.”

“University of Haifa puts a strong emphasis on social and environmental sustainability, in accordance with the United Nations’ Sustainable Development Goals (SDGs). The University, and its leading researchers are fully committed to act according to such goals, and we hope to inspire our students and alumni to peruse the same principles. As a result, we are extremely proud of Inna Braverman, for founding Eco Wave Power, which is working towards wave energy commercialization. We find Inna’s work to be truly admirable and we wish her best of luck in her ambitious goal of changing the world, one wave at time,” said Prof. Ron Robin, University of Haifa president.

The 50th Board of Governors Gala, titled “Preserving the Past, Protecting the Future,” will feature the award ceremony, as well as a special joint concert with multi-platinum recording artist Rami Kleinstein and Pablo Rosenberg. The university will also honor Elie Horn, a noted Brazilian businessman and philanthropist, with an honorary doctorate at the gala.

Eco Wave Power is recognized as a “Pioneering Technology” by the Israeli Ministry of Energy and was labelled as an “Efficient Solution” by the Solar Impulse Foundation. Eco Wave Power received funding from the European Union Regional Development Fund, Innovate UK and the European Commission’s Horizon 2020 framework program. The Company has also received the “Global Climate Action Award” from the United Nations.

About University of Haifa

The University of Haifa, the largest research university in northern Israel, is the first Israeli university to adopt the UN Sustainable Development Goals.

The University’s distinctive mission is to foster academic excellence in an atmosphere of tolerance and multiculturalism. Our faculty and student population is unique in its composition. Here, Jews, Arabs, Druze, Haredi and secular students, new immigrants and military and security personnel come together to study, teach and learn.

Driven by unusual crossings between fields of research and social responsibility, the University of Haifa is creating a new learning environment, a stronger community, and a better Israeli society.