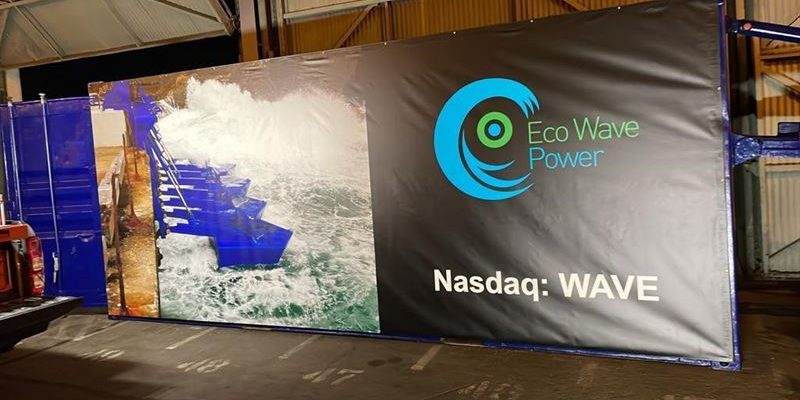 Los Angeles, California, December 14, 2022 – Eco Wave Power Global AB (publ) (Nasdaq: WAVE) (“Eco Wave Power” or the “Company”) announced today that the energy conversion unit, formerly deployed in Gibraltar, has officially arrived at its new home, AltaSea at the Port of Los Angeles, United States, where it will be installed as a pilot station in the coming months. This is the first U.S. location for Eco Wave Power’s technology, which is already deployed in Israel with plans for further deployments in Spain, Portugal, Turkey and other locations, as part of the Company’s current 404.7 MW project pipeline.

Eco Wave Power entered a collaboration agreement with AltaSea in early 2022 and announced plans to relocate the energy conversion unit from Gibraltar to AltaSea’s 35-acre campus located at the Port of Los Angeles, the nation’s busiest seaport. With the energy conversion unit’s arrival, Eco Wave Power has reached a key milestone in its commitment to bringing the Company’s innovative wave energy technology to the United States, offering a new source of renewable energy for the nation.

The United States has been focused on bringing new renewable energy sources online and doubled down on that focus with the recent enactment of the Inflation Reduction Act of 2022, which included a $369 billion investment in climate and energy programs. U.S. President Joe Biden called the investment a “huge step forward” towards meeting the country’s ambitious climate goals and improving the country’s energy security.

“This year, we set out to expand our global presence, especially in the United States as it presents an incredible opportunity for growth,” said Inna Braverman, Founder and CEO of Eco Wave Power. “This is just the start in the United States. Moving the station from Gibraltar to Los Angeles in just a few months shows yet another strength of our technology: we are one of the only portable renewable energy technologies that can be easily transported, from country to country, to fit the energy needs of any country.”

The United States, with over 95,000 miles of coastline and over 128 million Americans living in coastal counties, is an ideal and strategic place to employ blue renewable energy technologies that could position the country to become a world leader for renewable energy from ocean and sea waves. According to the U.S. Energy Information Administration, wave energy off the nation’s coasts could generate the equivalent of about 66 percent of all the electricity generated across the country in 2020.

AltaSea at the Port of Los Angeles is a sprawling 35-acre nonprofit center devoted to accelerating scientific collaboration and advancing the emerging blue economy through innovation and job creation. AltaSea is the nation’s largest blue economy research and development center, focused on creating well-paying jobs, finding solutions to climate change, and working to solve some of the most pressing issues in the ocean environment. AltaSea currently is home to many tenants, including premier U.S. colleges such as the University of Southern California and UCLA, and innovative tech startups, like Blue Robotics, Inc. and RCAM Technologies, Inc.

“We believe that Eco Wave Power aligns well with the AltaSea vision, creating a new way of generating renewable energy, that will help California meet its ambitious goals to address the climate crisis. We are looking forward to welcoming this innovative pilot,” Terry Tamminen, AltaSea CEO and former Secretary of the California Environmental Protection Agency (CalEPA), said in response to the relocation of the wave energy pilot to AltaSea’s campus.

Eco Wave Power and AltaSea are expected to host an official “unboxing” event in January 2023 to celebrate the technology’s arrival in the United States. More details will be announced in the coming weeks.

The Company is currently finalizing the construction of its grid connected project in Israel, with co-investment from the Israeli Energy Ministry, which recognized the Eco Wave Power technology as “Pioneering Technology” and will soon commence the installation of its newest pilot in AltaSea’s premises in the Port of Los Angeles. The Company also holds concession agreements for commercial installations in Europe and has a total projects pipeline of 404.7MW.

Read more about Eco Wave Power at www.ecowavepower.com. Information on, or accessible through, the websites mentioned above does not form part of this press release.

This press release contains forward-looking statements within the meaning of the “safe harbor” provisions of the Private Securities Litigation Reform Act of 1995 and other Federal securities laws. Words such as “expects,” “anticipates,” “intends,” “plans,” “believes,” “seeks,” “estimates” and similar expressions or variations of such words are intended to identify forward-looking statements. For example, Eco Wave is using forward-looking statements when it discusses: the installation of the Company’s energy conversion unit as a pilot station in AltaSea at the Port of Los Angeles; its plans to expand the Company’s global presence and the further deployment of its energy conversion unit in Spain, Portugal, Turkey and other locations, as part of the Company’s current 404.7 MW project pipeline; the ability of the Company’s technology to fit the energy needs of any country; its commitment to bringing the Company’s innovative wave energy technology to the United States; its ability to help California meet its ambitious goals to address the climate crisis; and its planned “unboxing” event to be held in January 2023 to celebrate the technology’s arrival to in the United States. These forward-looking statements and their implications are based on the current expectations of the management of Eco Wave and are subject to a number of factors and uncertainties that could cause actual results to differ materially from those described in the forward-looking statements. Except as otherwise required by law, Eco Wave undertakes no obligation to publicly release any revisions to these forward-looking statements to reflect events or circumstances after the date hereof or to reflect the occurrence of unanticipated events. More detailed information about the risks and uncertainties affecting Eco Wave is contained under the heading “Risk Factors” in Eco Wave Power’s Annual Report on Form 20-F for the fiscal year ended December 31, 2021 filed with the SEC, which is available on the on the SEC’s website, www.sec.gov.