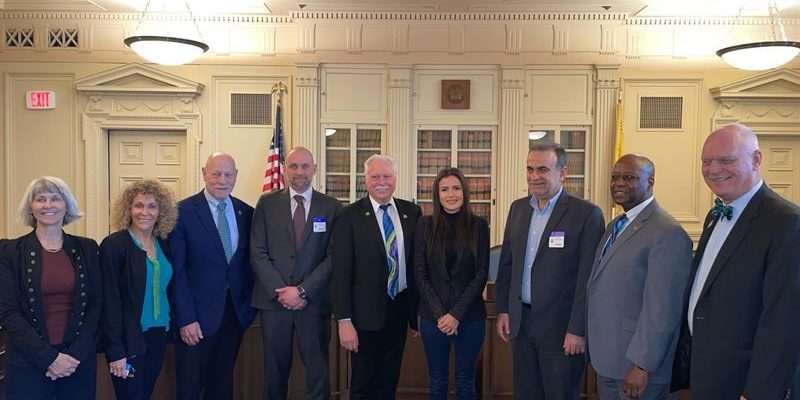 Stockholm, Sweden – March 21, 2022 – Eco Wave Power Global AB (publ) (Nasdaq U.S.: WAVE; Nasdaq First North: ECOWVE) (“Eco Wave Power” or the “Company”), today announced that Inna Braverman, Founder and CEO of Eco Wave Power, was invited to testify before a New Jersey Legislature hearing about wave energy. The Assembly Special Committee on Infrastructure and Natural Resources (the “Committee”), and its chairman, Assemblyman Robert Karabinchak, asked the guests to share their expertise and knowledge on wave energy and its outlook for growth in the State of New Jersey.

The list of participants who provided testimony to the Committee that took place on Thursday, March 17, 2022, included Philipp Stratmann, President and CEO of Ocean Power Technologies, Marcus Lehmann, Founder and CEO of CalWave Power Technologies Inc., Professor Muhammad R. Hajj, Chair of the Department of Civil, Environmental and Ocean Engineering and Director of the Davidson Laboratory at New Jersey’s Stevens Institute of Technology and Patty Cronheim, Director at New Jersey League of Conservation Campaigns.

Assemblyman Karabinchak opened the session by saying “This session is extremely important for our future…On a personal side, energy is going to change in the future. Wind turbines and our solar farms are the start for clean energy in New Jersey, however, there are also other sources for renewable energy, and we are going to speak about one of them today – which is wave energy.”

Assemblyman Karabinchak referred to a recent section called “The Future of Everything” on The Wall Street Journal, that featured Eco Wave Power in an article about “The Next Bets for Renewable Energy” stating, “This is the future, and today we have the opportunity to speak about our future needs and the sources of energy that produce clean energy and will help us get away from fossil fuels in the future.”

The next speaker was Professor Muhammad R. Hajj, that stated that “The blue economy is a 1.5 trillion dollars economy in the world- it is very large. In New Jersey, most of the population, which is around 7.1 million lives in coastal regions.”

According to Professor R. Hajj: “To give you an idea, in wind industry, when you have one meter square, 9 meters per second, that gives you 470 watts per square meter. In comparison, when you have one meter of wave height it will give you ten times as much power, which is 4900 watts per meter. This is significant because one meter of wave, even if I take an efficiency of 25%, could power a household for a whole year, and New Jersey actually has 10,000 watts per meter right on the shore.”

He also added that “Wind and solar farms take a lot of space… they need up to 50 times the space that is required for coal and 100 times the space that is required for fossil fuels, and this has been an impediment, because land can be used for agriculture and for other things and you don’t want to use all the land for solar and wind farms. Wave power could address this problem. We are not looking at wave power for just powering the grid, wave power can be used to power the blue economy…We could use wave energy to power remote islands and remote communities – it takes a lot of power to transport fossil fuels and power, we could do this directly with wave power… Wave power could be used for building more resilient coastal communities and use wave power when we do not have power during hurricanes … We could also use it for desalination, can you imagine having water and energy at the same place and the same time?  You could do a lot with that technology…”

While presenting to the Committee about the great potential of wave energy, Ms. Braverman stated that “according to the U.S. Energy Information Administration, wave energy can provide around 66% of all U.S. Energy needs”.

Ms. Braverman also outlined the advantages of Eco Wave Power’s innovative technology, mentioning that the Company’s technology is cost-efficient, reliable, insurable, environmentally friendly and can safely connect to the grid. She mentioned that Eco Wave Power is “very much interested in harnessing wave energy in New Jersey because of its very significant wave energy potential and in light of New Jersey’s very ambitious Energy Master Plan.”

Ms. Braverman presented her hope that wave energy will be integrated in New Jersey’s Energy Master Plan saying that: “New Jersey has been a leader of energy innovation since the days of Thomas Edison. Governor Murphy has laid out one of the most ambitious clean energy goals in the country, but that could only be met when all renewable energy sources work together, including wave energy.”

She also added that “If electricity from the waves will replace the Logan Township and Chambers coal plants, which are the last remaining coal plants in the State of New Jersey, the reductions in CO2 emissions will have a similar effect as taking about 800,000 passenger vehicles off the road for one year.”

An audio recording of the hearing is available in the following link – https://www.njleg.state.nj.us/archived-media/2022/ANR-meeting-list/media-player?committee=ANR&agendaDate=2022-03-17-10:00:00&agendaType=M&av=A

The link to the recording does not constitute a part of this press release.

Information on, or accessible through, the website mentioned above does not form part of this press release