Eco Wave Power is featured in The Wall Street Journal’s “The Future of Everything” as one of the Bets for Renewable Energy! 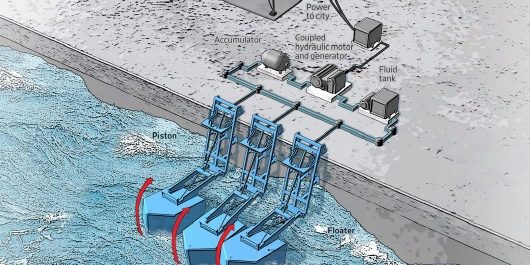 The Next Bets for Renewable Energy

With enormous kites that pull shipping vessels across oceans using wind power, floating devices attached to jetties that generate electricity from the motion of waves hitting the shore and other new technologies, companies are looking to diversify options for harnessing familiar sources of renewable energy in innovative ways. Many of these innovations aim to overcome cost and maintenance issues associated with existing technologies

As world leaders endorse climate goals like reaching net-zero greenhouse-gas emissions within the next 30 years, these companies are pushing to move their projects from research and development to commercial phases. The net-zero objective—balancing emissions produced and emissions removed from the atmosphere—has spurred growth in the business of sustainable energy, which generates fewer emissions than fossil fuels. Some of these possibilities, like satellites that can wirelessly beam down solar energy from orbit, remain experimental, while others, like underwater turbines that harness tidal movements, have progressed from prototypes to commercial demonstrations. Here are some of the newest developments in generating power from the air, sun, water and Earth. 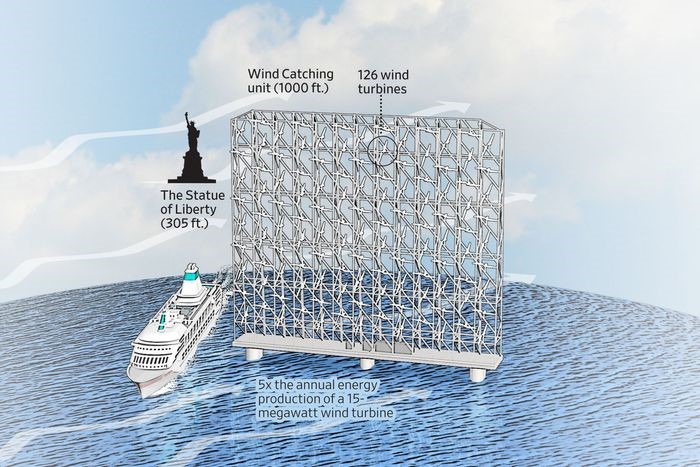 This unit by Wind Catching Systems will generate five times the annual energy production of a 15-megawatt wind turbine, the company says.

Norwegian company Wind Catching Systems is developing a roughly 1,000-foot-tall structure consisting of 126 small turbines stacked and arranged together. The plan is for this “Wind Catching unit” to sit atop a floating platform anchored to the ocean floor about 50 miles offshore. The company says the unit will be able to turn 360 degrees to capture wind from any direction and generate electricity sent via underwater transmission lines back to shore.

The unit can produce up to five times more energy using one-fifth the space of typical offshore wind farms, says CEO and co-founder Ole Heggheim. The company expects to start construction on its first commercial prototype in the North Sea in 2023 and plans to

market these wind catchers in the U.K. 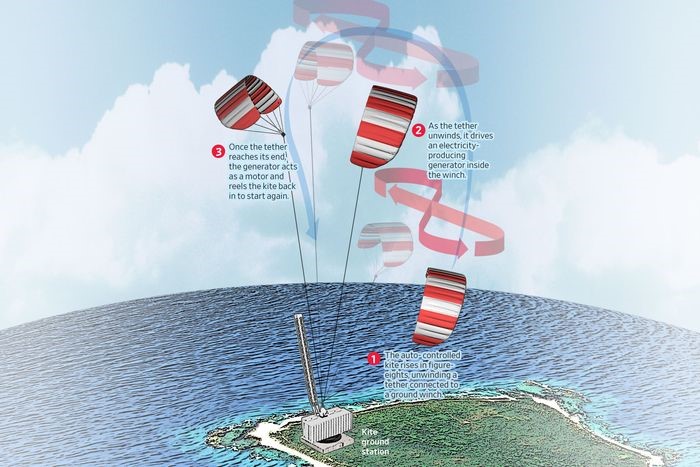 SkySails employs a flight-control pod that uses a motor to pull on lines connected to the kite to steer it. Flying in figure-eight patterns maximizes the kite’s pulling force and therefore energy yield.

SkySails Group, a Germany-based power company, is developing kites that fly a quarter-mile off the ground to produce energy. As the kite rises, it unwinds a tether connected to a winch and generator, which convert the force on the tether into electricity.

“High-altitude wind is the largest untapped energy resource on Earth,” founder and managing director Stephan Wrage says. Its largest kites are nearly 1,940 square feet in size—generating about 200 kilowatts of power, and meant to replace diesel generators in remote, off-grid islands and villages. The company has installed several pilot kites at sites including the Indian Ocean island nation of Mauritius, with plans to connect them to the grid. Starting next year, the company plans to start shifting toward commercial rollout, and eventually hopes to increase its kite size and flying altitude. 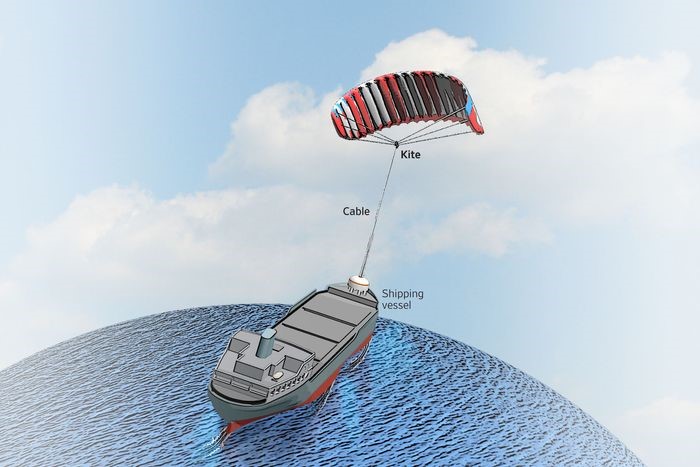 In December, Airseas installed the Seawing on a transatlantic vessel. The company expects an average of 20% fuel savings for ships using the kite.

A French company, Airseas, has developed an 10,800-square-foot kite called Seawing that attaches to a ship’s bow with a cable and pulls the vessel along using wind power. The company’s aim is to help decarbonize the shipping industry, says CEO and co-founder Vincent Bernatets. 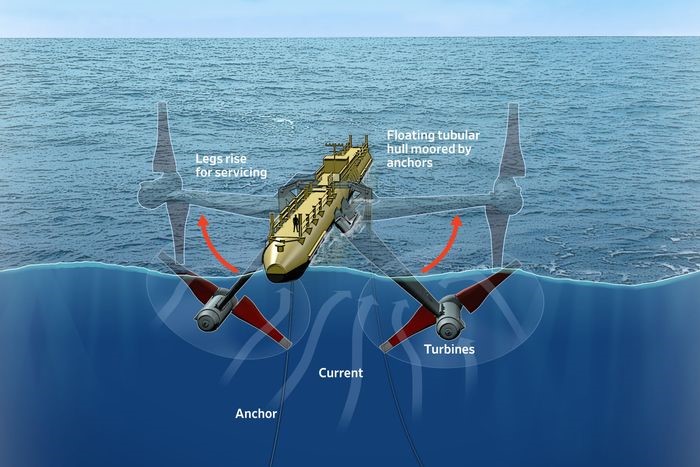 Orbital O2 has rotors measuring about 65 feet in diameter connected to legs that sink into the waves.

When placed underwater, turbines can harness kinetic energy from the natural rise and fall of ocean tides to generate electricity. But turbines placed on the seafloor are expensive to build and maintain. So Scottish company Orbital Marine Power designed a floating tidal turbine named Orbital O2.

The 236-foot-long turbine is anchored offshore near Scotland’s Orkney Islands, where a subsea cable connects it to the local grid. It can power around 2,000 U.K. homes and offset more than 2,400 tons of carbon annually. The company is focused on developing sites around the U.K. coastline and Europe, CEO Andrew Scott says, with an aim to deploy flotillas of tidal turbines. Future turbines will be anchored between about a mile and 3 miles offshore. 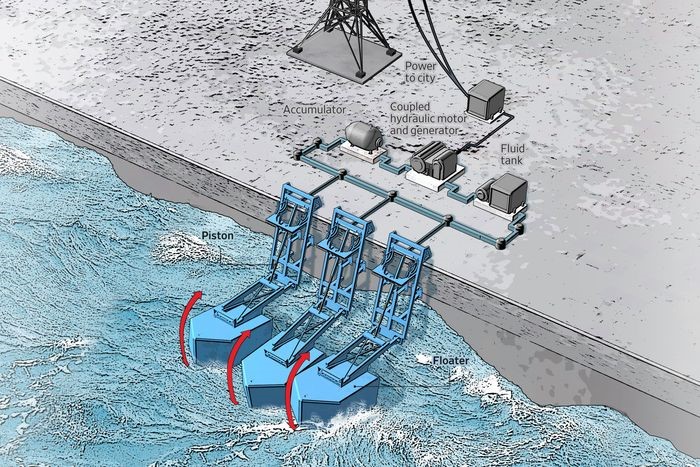 The floaters send pressurized hydraulic fluid to turn a generator that transfers power to the grid using existing transmission lines.

Eco Wave Power Ltd. is working on harnessing water power from the shore. The company has designed 10-foot-long floating devices attached to piers, jetties and existing marine structures. These floaters use the rising and falling movement of waves to generate electricity.

The technology requires less than two feet of water to produce energy, “so we can basically install everywhere and anywhere,” says CEO and co-founder Inna Braverman. If waves get too rough, the devices can lock in an upward position above the water line. The company opened a 100-kilowatt facility connected to the grid in Gibraltar in 2016 that will be refurbished and moved to Los Angeles within the next three months. It expects to connect another power station in Jaffa, Israel, to the local grid by midyear this year. Future projects include possible facilities in New Jersey, California and Portugal. 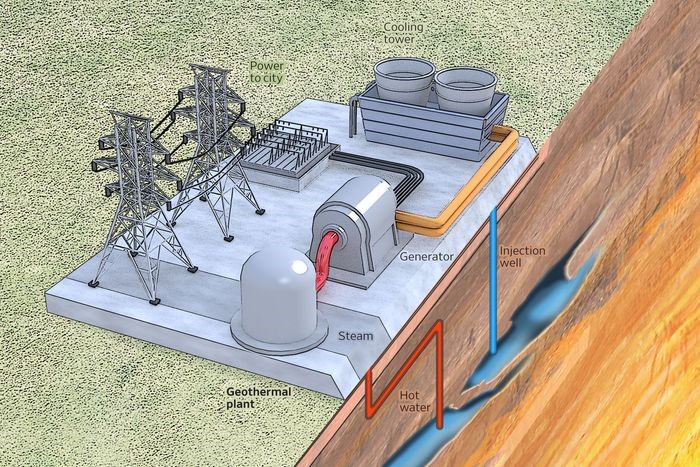 Some geothermal power plants use wells drilled as deep as two or three miles into the Earth’s crust.

Heat left over from when Earth formed and from radioactive elements decaying inside the planet’s molten core permeates toward the crust, creating accessible wells of steam or hot water. Some geothermal power plants pipe that steam or water—between 300 and 700 degrees Fahrenheit—to the surface for use as direct heat. Other plants can also convert that heat into electricity. The hydrothermal resources are injected back into the ground after cooling.

More than 60 geothermal plants operate in the U.S. today, providing nearly 4 gigawatts of electricity, which can power more than one million homes. But the plants tend to be concentrated in areas like California and Nevada with geothermal hot spots like geysers or volcanoes, or where tectonic plates grind past each other and Earth’s heat can move more easily through the crust. The key to making geothermal competitive with other renewables, is “going into regions where nature hasn’t been so generous, and figuring out a way to engineer the system,” says Cornell University professor Jefferson Tester. He is chief scientist for a pilot project at Cornell that aims to directly heat the 30,000-person campus with geothermal resources by 2035.

One solution, Dr. Tester says, is injecting “hot, dry rock”—which lacks the naturally occurring hydrothermal resources needed to generate electricity—with high-pressure water from the surface. That process can crack the rock, allowing a power plant to then collect the injected water after it is heated. The U.S. bipartisan infrastructure bill passed last year devoted $84 million to innovations like this, known as enhanced geothermal systems. These systems may enable engineers to expand the geographic range of where geothermal plants can be built. 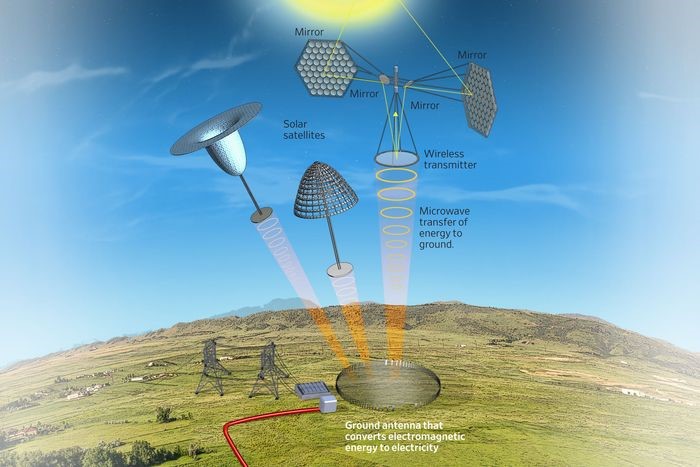 Experimental designs and prototypes of satellites that can wirelessly beam down solar energy from orbit.

The sun’s power can only intermittently be harnessed from the ground due to weather, changing seasons and nighttime hours. But some scientists and engineers say within the next decade solar energy could come consistently from much closer to the source—wirelessly beamed down as microwaves or laser beams from orbiting satellites to receiving stations on Earth connected to the electrical grid.

“The basics are to put a large, very large platform in space, harvest sunlight, where the sun shines, essentially 99.95% of the time, and send it to markets on the ground, where, on average, the sun is shining only about 15% of the time,” says former NASA scientist John Mankins, president of Mankins Space Technologies, a company working on developing a 1-mile-wide solar power satellite prototype that will use microwave beaming.

Wirelessly transferring energy across distances using microwave transmission has already been tested: The U.S. Naval Research Laboratory sent 1.6 kilowatts over a distance of 0.6 mile last year. Engineers at the Japan Aerospace Agency have sent about the same amount of energy the length of a football field.

Other groups are also working on the experimental technology: The California Institute of Technology plans on testing prototypes, which can transfer solar power in space via a steerable microwave beam, by the end of 2022. Engineers in Japan, China, Australia and Russia have all either made strides or expressed interest in developing space-based solar power.

The U.K. has integrated space-based solar energy into the country’s plan to reach net-zero emissions. Its Space Energy Initiative is spearheading a plan to send a 500-megawatt prototype that uses microwave beaming into orbit within the next decade, and aims to connect a satellite four times more powerful to the grid by 2035.

(Most technologies not to scale)