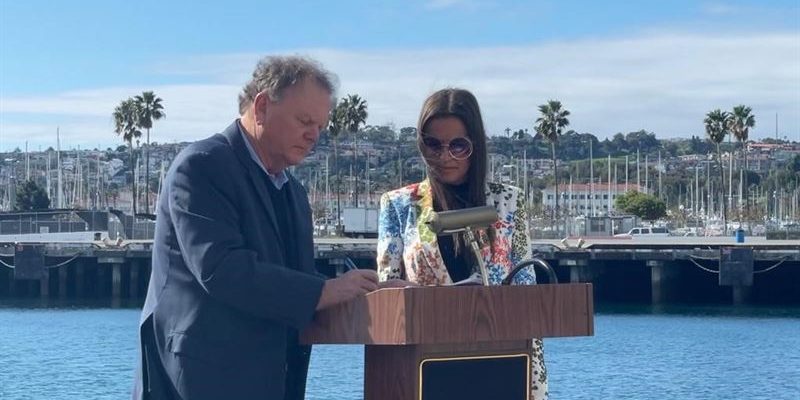 Terry Tamminen, CEO of AltaSea and Inna Braverman Founder and CEO of Eco Wave Power, during the Signing Ceremony of the Collaboration Agreement, in the Port of Los Angeles

WED, MAR 02, 2022 15:00 CET
Stockholm, Sweden – March 2, 2022 – Eco Wave Power Global AB (publ) (Nasdaq: WAVE, Nasdaq First North: ECOWVE) (“Eco Wave Power” or the “Company”), a leader in the production of clean electricity from ocean and sea waves, today, announces its intent to relocate the energy conversion unit from Gibraltar, after full overhaul, to AltaSea’s premises in the Port of Los Angeles (“AltaSea”), in accordance with the agreement entered between the parties in January, 2022.

A range of factors led to the decision to move the energy conservation unit. The primary reason is Eco Wave Power’s increasing interest in the US market, emphasized by the company’s recent listing on Nasdaq Capital Market. Additional considerations include the condition of the Ammunition Jetty, and that Eco Wave Power has accumulated almost six years of operational experience with over 49,632 grid connection hours, in its Gibraltar pilot site, and is therefore ready to continue with its plan to expand to larger scales and new regions with its pioneering technology.

According to the agreement between Eco Wave Power and the Government of Gibraltar, the pilot was built and originally supposed to operate only for two years, with the purpose of proving that wave energy can safely connect to the grid and withstand the Gibraltar storms, using its storm-protection mechanism. However, the company decided to keep the pilot station operational for a longer time, as it was used as a real conditions research and development facility for the company.

This enabled the development of an improved storm protection mechanism, upgrades to the mechanical parts of the technology, and improvements to the automation system, that will be implemented in the EWP-EDF One project in Israel, which is currently in advanced construction and expected to commence operation in the upcoming months.

In the last period of operation analyzed by Eco Wave Power’s engineering team, the Gibraltar operation and maintenance cost (not including employees) decreased from 18% of the Capex in 2017, to only 3.2% in 2021.

Also, during the period from August 2020 through July 2021, the Company was able to reach 73% of the forecasted available energy for the site, which is a significant improvement to the 30% in the parallel period in 2017-2018. It is the Company’s intention to release more detailed results in the upcoming months.

The floater mechanisms of the power station will be sent to steel recycling, while the conversion unit will be fully overhauled and refurbished to meet the U.S. electrical standards and shipped to Los Angeles in the near future. Additionally, Eco Wave Power intends to develop and supply new and upgraded floaters for its planned pilot in AltaSea’s premises, to optimally meet the local marine conditions.

In parallel, Eco Wave Power shall be entering discussions with the Government of Gibraltar regarding a larger space necessity for its’ potential commercial scale development of an up to 5MW in Gibraltar, in accordance with the terms of the Power Purchase Agreement between the parties.

In line with this announcement, Inna Braverman, Founder and CEO of Eco Wave Power stated: “We are very grateful to the Government of Gibraltar, the Ministry for the Environment, Gibraltar Electricity Authority and the European Regional Development Fund (ERDF) for providing us with the opportunity for our first ever grid connected pilot. This has led to new and important developments in our technology, which were added to the Company’s patents portfolio and will be implemented in future projects. It also assisted us with securing new projects which were added to the Company’s projects pipeline, including our upcoming project in Gibraltar’s neighboring country – Portugal. At the same time, we are very excited about the planned pilot on AltaSea’s premises in the Port of LA, as the U.S. is a high priority market for Eco Wave Power. We are officially listed on the Nasdaq U.S. and look forward to establishing a strong operational presence, including a local office and a first grid-connected wave energy project – on AltaSea’s premises in the Port of LA. We believe that AltaSea and its inspirational commitment to the blue economy can significantly assist in achieving our goals, while also advancing the U.S.’s ambitious target of cutting emissions to net zero no later than 2050.”

Charles Collinson, Director of European Union Programmes Secretariat, HM Government of Gibraltar commented: “Eco Wave Power was one of the first projects approved under the 2014-2020 European Regional Development Fund Programme. The project was unique in both concept and achievements. It was able to create a pilot project for research and development of a unique and innovative wave power station within the jurisdiction of Gibraltar, together with all the inherent problems of space and lack of infrastructural support. The project is truly a success story of the ERDF programme. Not only achieving its initial targets but setting new standards in the renewable energy field. It has minimal visual impact on the landscape; does not create any interference on the sea floor; minimal to no impact on the marine environment; produces no pollutants, waste products, noise nor gaseous emissions. It reduces shoreline and breakwater erosion and extends their life span. It has almost zero carbon footprint. It is also a prime example of the leadership of women in the complex and innovative field of wave energy technology.”

Terry Tamminen, CEO of AltaSea, commented, “We believe that Eco Wave Power aligns well with the AltaSea vision, creating a new way of generating renewable energy, that will help California meet its ambitious goals to address the climate crisis. We are looking forward to a welcoming this innovative pilot.”

Eco Wave Power is recognized as a “Pioneering Technology” by the Israeli Ministry of Energy and was labeled as an “Efficient Solution” by the Solar Impulse Foundation. Eco Wave Power’s project in Gibraltar has received funding from the European Union Regional Development Fund and the European Commission’s Horizon 2020 framework program. The company has also received the “Global Climate Action Award” from the United Nations.

About AltaSea at the Port of Los Angeles

AltaSea at the Port of Los Angeles is dedicated to accelerating scientific collaboration, advancing an emerging blue economy through business innovation and job creation, and inspiring the next generation, all for a more sustainable, just and equitable world.

AltaSea will turn to the ocean to develop solutions for some of the planet’s most pressing challenges, such as climate change, energy supply and global food security. AltaSea’s goal is a sustainable, just and equitable world. To achieve our mission, we embrace an accelerated approach to diversity and inclusion, and as a fundamental part of our vision and success, AltaSea is committed to a workplace that will represent and empower our community.

This commitment includes economic and educational outreach to underserved communities, as well as considering how our decisions as an organization affect those communities. In addition, AltaSea is dedicated to forming and deepening partnerships with organizations who are serving our underserved stakeholders.

This press release contains forward-looking statements within the meaning of the “safe harbor” provisions of the Private Securities Litigation Reform Act of 1995 and other Federal securities laws. Words such as “expects,” “anticipates,” “intends,” “plans,” “believes,” “seeks,” “estimates” and similar expressions or variations of such words are intended to identify forward-looking statements. For example, Eco Wave Power is using forward-looking statements when it discusses EWP-EDF One project in Israel, its intention to release more detailed results in the upcoming months, recycling and refurbishing of the wave energy array, discussions with the Government of Gibraltar regarding a larger space necessity for its potential commercial scale development of an up to 5MW in Gibraltar, planned pilot in AltaSea, that AltaSea’s inspirational commitment to the blue economy can significantly assist in achieving the Company’s goals, while also advancing the U.S. ambitious target of cutting emissions to net zero no later than 2050, and that Eco Wave Power aligns well with the AltaSea vision and goal. These forward-looking statements and their implications are based on the current expectations of the management of Eco Wave Power and are subject to a number of factors and uncertainties that could cause actual results to differ materially from those described in the forward-looking statements. Except as otherwise required by law, Eco Wave Power undertakes no obligation to publicly release any revisions to these forward-looking statements to reflect events or circumstances after the date hereof or to reflect the occurrence of unanticipated events. More detailed information about the risks and uncertainties affecting Eco Wave Power is contained under the heading “Risk Factors” in Eco Wave Power’s Registration Statement on Form F-1 filed with the SEC, which is available on the SEC’s website, www.sec.gov.