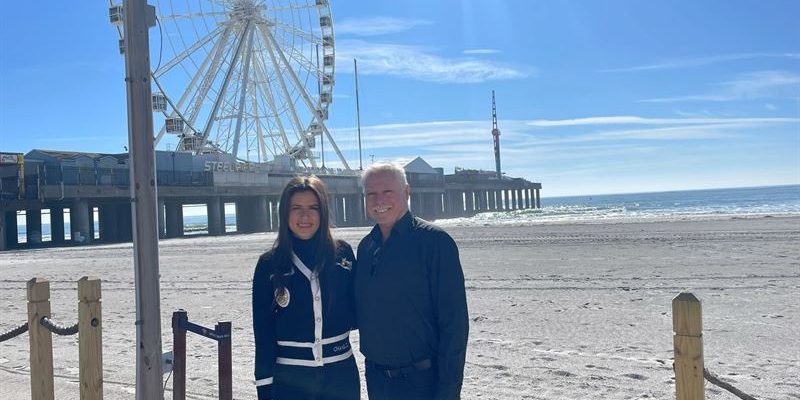 Assemblyman Karabinchak stated that he plans to introduce new legislation initiative in this session to bolster wave energy as the next, up-and-coming renewable energy source for the state. Recognizing this technology’s incredible potential, New Jersey can aim to include wave energy in its Energy Master Plan and develop a streamlined process for its deployment along the coast. This action will help New Jersey to become the first U.S. state or territory to have a commercial wave energy proof of concept.

In light of the aforementioned plans, Eco Wave Power is pleased to announce that on Friday, March 11, 2022, Assemblyman Karabinchak, alongside Eco Wave Power’s Founder and Chief Executive Officer, Inna Braverman, visited the Steel Pier and additional marine structures in the State to explore potential sites for a first-of-its-kind wave energy pilot deployment in the state of New Jersey.

“The harsh impacts and costly realities of climate change are all too familiar in New Jersey, but innovative renewable energy solutions, such as wave energy, will help mitigate those challenges. We will be delivering on the promise of a cleaner, greener path forward that will benefit our state for generations to come. We believe that wave energy can create hundreds of good-paying jobs, help spur economic development across the region, and continue putting New Jersey on the path toward a 100% clean energy future,” stated Assemblyman Karabinchak.

The site visit is a preparatory stage for the upcoming discussion regarding the promotion of wave energy technologies, which will be held at 10:00 a.m. EST on March 17, 2022, by the Assembly Special Committee on Infrastructure and Natural Resources of New Jersey (the “Committee”), where Eco Wave Power and two additional marine energy companies will present their vision for generating clean electricity from the waves in the state. Attendance will also include academics from New Jersey research institutes (Rutgers, the State University of New Jersey and Stevens Institute of Technology), environmental advocates, and other interested parties.

The Committee members are:

The meeting is open to the public/press and can be watched live in the following link: https://www.njleg.state.nj.us/live-proceedings (ANR hearing will show up on March 17, 2022).

The link to the meeting does not constitute a part of this press release.

Information on, or accessible through, the website mentioned above does not form part of this press release

This press release contains forward-looking statements within the meaning of the “safe harbor” provisions of the Private Securities Litigation Reform Act of 1995 and other Federal securities laws. Words such as “expects,” “anticipates,” “intends,” “plans,” “believes,” “seeks,” “estimates” and similar expressions or variations of such words are intended to identify forward-looking statements. For example, Eco Wave Power is using forward-looking statements when it discusses the advancement of its efforts to bring wave energy to the state of New Jersey, Assemblyman Karabinchak’s legislation initiative with respect to wave energy and that this initiative can potentially help New Jersey become the first U.S. state or territory to have a commercial wave energy proof of concept, exploration of potential sites for a first-of-its-kind wave energy pilot deployment in the state of New Jersey, that innovative renewable energy solutions, such as wave energy, will help mitigate the challenges of climate change, that the State of New Jersey will be delivering on the promise of a cleaner, greener path forward that will benefit our state for generations to come and Assemblyman Karabinchak’s belief that wave energy can create hundreds of good-paying jobs, help spur economic development across the region, and continue putting New Jersey on the path toward a 100% clean energy future. These forward-looking statements and their implications are based on the current expectations of the management of Eco Wave Power and are subject to a number of factors and uncertainties that could cause actual results to differ materially from those described in the forward-looking statements. Except as otherwise required by law, Eco Wave Power undertakes no obligation to publicly release any revisions to these forward-looking statements to reflect events or circumstances after the date hereof or to reflect the occurrence of unanticipated events. More detailed information about the risks and uncertainties affecting Eco Wave Power is contained under the heading “Risk Factors” in Eco Wave Power’s Registration Statement on Form F-1 filed with the SEC, which is available on the SEC’s website, www.sec.gov.