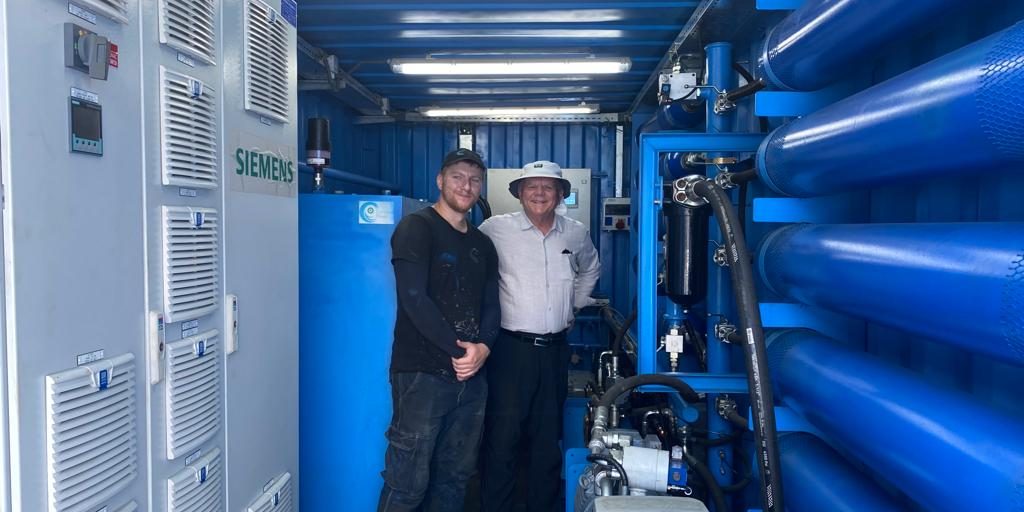 The AltaSea pilot station will be the first U.S. location for Eco Wave Power’s technology, which is already deployed in Israel. The Company plans further deployments in Spain, Portugal and other locations, completing the Company’s 327.7 MW current project pipeline.

Eco Wave Power entered a collaboration agreement with AltaSea earlier this year and announced plans to install a first of its kind wave energy pilot in AltaSea’s 35-acre campus located at the Port of Los Angeles, the nation’s busiest seaport.

This pilot station is part of Eco Wave Power’s increased focus on bringing its pioneering wave energy technology to the United States and expanding their worldwide presence.

“It was great to visit Eco Wave Power’s pioneering wave energy power station at the Port of Jaffa and witness firsthand the generation of clean electricity through waves in action,” said Terry Tamminen, President and CEO of AltaSea, who previously served as Secretary of California’s Environmental Protection Agency. “I am excited to have the pilot station on AltaSea’s campus in the coming weeks. Eco Wave Power’s technology will create a new way of generating renewable energy to help both California and the United States reach their goals to decrease our carbon footprint and use more innovative clean energy sources. Blue economy is the future.”

“It was our absolute pleasure to host Terry Tamminen at our EWP-EDF One wave energy power station at the Port of Jaffa, enabling him to see the innovative nature of our technology, which will soon be implemented on the AltaSea campus at the Port of Los Angeles,” said Eco Wave Power Founder and CEO Inna Braverman.

The Code Conference comes in the midst of a historic heat wave in Los Angeles, in which temperatures have risen to record highs, causing widespread energy Flex Alerts and warnings about potential wildfires. The heat wave has caused the power grid to struggle to keep up with the surging demand with threats of widespread rolling outages.

We believe this extreme weather pattern clearly emphasizes the need for the incorporation of innovative renewable energy sources, such as wave energy, to California’s national grid.

According to the U.S. Energy Information Administration, wave energy off the nation’s coasts can generate the equivalent of about 66 percent of all the electricity generated across the U.S. in 2020, which can potentially help significantly alleviate stress on California’s grid, and prevent climate change related phenomena, such as heat waves and fires.

“We are excited that our power station will soon arrive at AltaSea at the Port of Los Angeles, which we believe will significantly reinforce our presence and commercialization plan in the Unites States, while diversifying California’s renewable energy resources, creating local workplaces and assisting California towards its ambitious zero carbon emissions plans,” added Braverman.

The Company is currently finalizing the construction of its grid connected project in Israel, with co-investment from the Israeli Energy Ministry, which recognized the Eco Wave Power technology as “Pioneering Technology” and will soon commence the installation of its newest pilot on AltaSea’s premises in the Port of Los Angeles. The Company also holds concession agreements for commercial installations in Europe and has a total projects pipeline of 327.7MW.

This press release contains forward-looking statements within the meaning of the “safe harbor” provisions of the Private Securities Litigation Reform Act of 1995 and other Federal securities laws. Words such as “expects,” “anticipates,” “intends,” “plans,” “believes,” “seeks,” “estimates” and similar expressions or variations of such words are intended to identify forward-looking statements. For example, Eco Wave Power is using forward-looking statements when it discusses: the arrival of the Company’s first U.S. power station to be located at AltaSea at the Port of Los Angeles; the Company’s planned developments in Spain, Portugal and other locations as part of its current project pipeline; that the AltaSea pilot station is part of Eco Wave Power’s increased focus on bringing its pioneering wave energy technology to the United States and expanding their worldwide presence, that the Company’s technology will create a new way of generating renewable energy to help California and the U.S. decrease their carbon footprints. These forward-looking statements and their implications are based on the current expectations of the management of Eco Wave and are subject to a number of factors and uncertainties that could cause actual results to differ materially from those described in the forward-looking statements. Except as otherwise required by law, Eco Wave undertakes no obligation to publicly release any revisions to these forward-looking statements to reflect events or circumstances after the date hereof or to reflect the occurrence of unanticipated events. More detailed information about the risks and uncertainties affecting Eco Wave is contained under the heading “Risk Factors” in Eco Wave Power’s Annual Report on Form 20-F for the fiscal year ended December 31, 2021 filed with the Securities and Exchange Commission (the “SEC”), which is available on the on the SEC’s website, www.sec.gov.